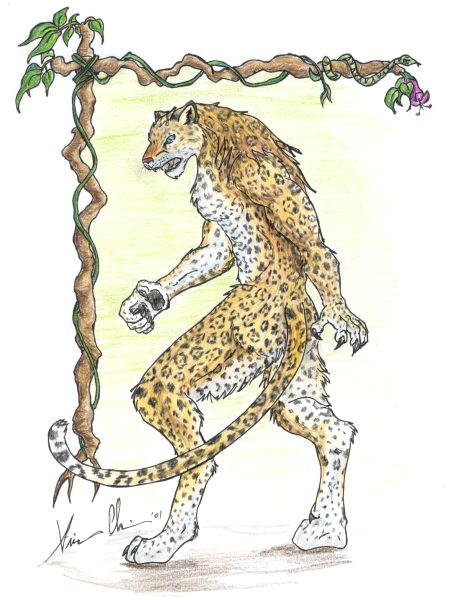 A race of powerful mythological beings, the Jaguara are a male dominated race that has few females and are at hom in the ancient rainforests of the central- and southern american continents. Led by Necalli.

Jaguara's have two shapes that they utilize. The most common shape is that of an anthromorphic jaguar and the other shape that they assume near humans are that of a human with a jaguar head. They're often quite muscled and the females differ only in that they are smaller than the males.

Strength is what rules the Jaguara's societies. Those strong enough get to rule, while those weaker obeys. Infighting in tribes are common, especially if a female is the prize. Jaguara's seldom fight with weapons, but prefer to fight with their claws and teeth.

The Jaguara are powerful and dextrous warriors. All Jaguaras start with Epic Strength 1 and Epic Dexterity 1 as well as Epic Appearance 1. These first rank Epic attributes are not affected by the Legend-1 maximum rank for Epic attributes.

They're also especially adept at hiding in jungle, giving them +4 dice to hide in jungle.

Jaguara start at legend 1 and may freely progress up to legend 3. Some Jaguara reach legend 4, but those are few. Only a handful of jaguara's have ever reached legend 5 and only one known (Necalli) has ever reached a legend higher than 7 and thus approached god status.